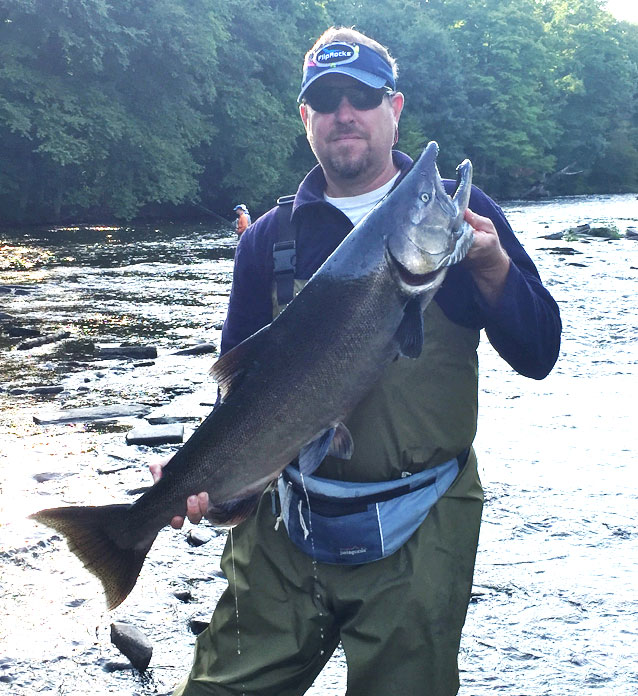 Anthony Graffeo, CEO and Founder of FlipRocks is an avid fisherman and outdoor enthusiast who has been brainstorming about footwear and apparel unique to this market for years.

His addiction to fishing started at the wee age of 4. He would often joke around saying “just give me a puddle to fish in and I’m happy.” Then at the age of 16, he went to fish the striper run in Montauk, NY. Anthony had surf fished for years on Long Island and in Montauk but never on Montauk Point. This terrain was rocky, sandy, slimy, and slippery so not knowing what would be the right kind of footwear for these types of surfaces, he did what anyone would do—he sought guidance from a pro, the owner of Jonny’s Bait and Tackle in Montauk. Jonny’s answer seemed good enough “wet shoes!” Well, to Anthony’s surprise these rubber shoes were horrible! They lacked support, the foot liner kept coming off, sand would flood them up and weigh them down. It was a terrible experience. Years later he decided he’d be better off sporting just flip flops to catch stripers and the sneering he’d receive from onlookers in full wet suits spoke volumes. Not to mention the hard falls he would take on sand-ridden dry rocks. Ouch!

There had to be a better way!

That was it, FlipRocks was born. A simple trip with his son and years of challenges against the elements and nature itself brought with it an epiphany. The excitement of the concept brought with it so much excitement that he had to share this with his partners, Alan and Thapa who are also outdoor enthusiasts.

Alan Urkawich has been a fisherman and outdoorsman for most of his life. Growing up in the City of Norwalk, CT is a far cry from the wilderness. However, childhood family trips to Bar Harbor, ME, Cape Cod, MA, and to as many National Parks up and down the East Coast of the United States as possible solidified his love for the outdoors.

Having been an artist from childhood. He continued to hone his craft Graduating on the deans list from the Art Institute of Pittsburgh, PA. Fast forward twenty years of building a career in marketing, design, publishing, video production and live events in tech communications. Needless to say, the love of communicating visually has become as much of his identity as being an outdoorsman.

In addition to being a visual communicator, fisherman and outdoorsman he enjoys a number of hobbies and passions. Carpentry and working with his hands as well as organic gardening, hiking, kayaking and working out with his young active family are among the top of the list.

The idea of FlipRocks started through a comment from his colleague and fishing buddy who had a cool idea. And now he finds himself taking this wild ride of helping create the most awesome flip flops for people that like to do everything in their flip flops… just like him.